A Brief History of Dunster Beach

1254 – Edward I granted The Hawn to Sir Reginald de Mohun of Dunster Castle.  The Hawn, once a navigable channel through the sands and pebbles to Nap Lock ridge on Dunster beach is now landlocked.  This freshwater lake was the old medieval port called Dunster Haven on the old course of the River Avill. The port had probably existed since the 12th century.

1279 – in the time of John de Mohun there is mention of the road which leads to the seaport of Dunster.

15th Century – Minehead developed as a port and gradually replaced Dunster.  Not enough dues were paid to provide for the regular dredging of the channel to Dunster Haven which gradually silted up.

1565 – Dunster Haven was still available for small boats to land goods such as salt, wine, coal and wood.

1640s – Dunster Haven was still in use.  There is a record of the Gift of Swansea paying 4 pence in keelage duty at Minehead on her way to Dunster during the Civil War.

17th Century – Dunster harbour had largely ceased to be used by the end of the century.

1920s – Dunster Beach began as a chalet site but with only one or two chalets.

1934 – a Miss Counsell visited the Castle office, chose a plot and built a chalet of Russian timber.  Rent was £3 per annum including water and the use of a toilet block.  The site had historically been used by travellers but was now closed to them. 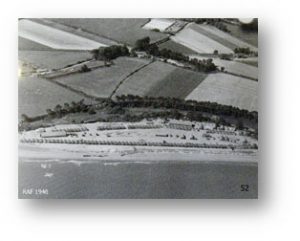 1940 – the Army requisitioned the site.  By this time there was a 2nd row of chalets and the owners were forced to vacate although they were paid a small rent as compensation.  The Army built roads on the site, fortified the beach with tall posts to prevent landings and erected brick buildings which were later sold at auction.

1945 – the Army left the site at the end of the war.  The chalets were left in a disgraceful condition although this did not stop people trying to buy them cheaply on the morning after the Army left.  Miss Counsell’s chalet had been used as a shoe repair shop and was “full of nails”.  She complained to the CO and was given some compensation.

1945 – Mrs Hallett (Chalet 137) returned to the site to find to two Hurricane aircraft on the beach, they had landed by mistake on their way to Ireland.

1950 – Geoffrey Fownes Luttrell of Dunster Castle died and it was declared that lands enjoyed by his predecessors had been sold to the Eagle Star Insurance Company.  This included Dunster Beach and the Hawn.

9th August 1955 – The Commissioners of Crown Lands granted a lease to Hutlands Ltd of the parcel of the land known as the Hawn.  The Eagle Star Insurance Company offered the site for sale in 1956 but the Chalet Owners Association missed out to a higher rival bid. 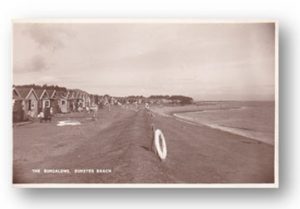 1965 – The Chalet Owners Association managed to raise the funds (although a risky leap of faith involving bank loans, overdrafts and forming a co-operative) so when Dunster Beach came up for sale again the chalet owners purchased the site for £55,000.  Beachlands (Dunster) Ltd became Dunster Beach Holidays …

Modern Day – Today Dunster Beach is a private site comprising of 230 chalets. They are  all owned by families and individuals, many who have a long standing history with the beach as the chalets have been passed down from one generation to the next. The car park and main site are privately owned by Dunster Beach Holidays Ltd.

We continue to manage the site with care and attention to the conservation of the area. From 2017-2021 Dunster Beach Holidays has spent in excess of £100,000 on bolstering the sea defences, in order to preserve this wonderful piece of coastline.

If you would like to know more there is a History of Dunster Beach book which is available to buy from the kiosk. 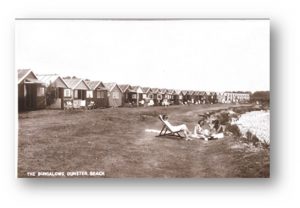 Go to Top
We use cookies on our website to give you the most relevant experience by remembering your preferences and repeat visits. By clicking “Accept”, you consent to the use of ALL the cookies.
Cookie settingsACCEPT
Manage consent

This website uses cookies to improve your experience while you navigate through the website. Out of these, the cookies that are categorized as necessary are stored on your browser as they are essential for the working of basic functionalities of the website. We also use third-party cookies that help us analyze and understand how you use this website. These cookies will be stored in your browser only with your consent. You also have the option to opt-out of these cookies. But opting out of some of these cookies may affect your browsing experience.
Necessary Always Enabled
Necessary cookies are absolutely essential for the website to function properly. This category only includes cookies that ensures basic functionalities and security features of the website. These cookies do not store any personal information.
Non-necessary
Any cookies that may not be particularly necessary for the website to function and is used specifically to collect user personal data via analytics, ads, other embedded contents are termed as non-necessary cookies. It is mandatory to procure user consent prior to running these cookies on your website.
SAVE & ACCEPT